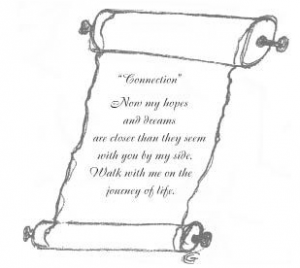 My name is Marlo. I’m five feet two inches tall on a windy day, but feel much taller. I smile a lot, love dogs and have a heartfelt kinship with all animals. I also have a soft spot for elders and children.
I’m close to my family and honor the bloodline theory. This makes me especially protective of the ones I love if someone crosses them. Our family gatherings are treasured times and our delicious home-cooked Italian meals are five-star with a dash of dirty four letter words.
I’ve always been in tune with the “little voice” inside me and rely on my gut instincts. I consider it a gift I cherish immensely. I’m also mesmerized by rainbows which trigger a “happy dance” in my spirit and my body. Rocks also intrigue me and I believe that their age and particular formations “speak,” giving us important messages about the past, present and future.
I learned these things by aligning with Nature. When I’m calm in her company, words or feelings come into my being along with a sense of understanding and truth for “what is.” Oneness is achieved by connecting to the God-like essence and beauty of all living things, the trees, flowers, grass, you get my drift and appreciating their sweetness.
Whenever I find a bird feather, I feel it’s a blessing from a winged ancestor or friend who’s flying “the good blue road.” And when a group of pigeons or doves fly gracefully in sync, it tells me that Jesus is close, as if he’s orchestrating their flight and saying, “You are never alone, my child.” Why else would they hang around telephone lines? To me, it’s a sign of connection and communication.
I like to inspire people to see the “unseen” world where spirits flicker and their energy touches us on new levels of consciousness. The sadness from the loss of body contact can then be replaced by contentment as we reunite with the spirits of our loved-ones. This ability came to me as a young child, I would see and hear people who had passed away. In junior high I began relaying messages to my friends from their loved ones. Long story short, fearful adult reactions made me curb that gift and tuck it away until later in my life.
Now that gift is sought-after and I’m grateful for the divine guidance that stayed with me throughout my life. I’m also pleased with myself for listening to the signs and deeply grateful to my mom and dad for teaching me about discernment, intuition, the healing affects of journaling, and the peaceful power of expressing my true self. I feel as if I walk around with invisible angel wings tucked neatly in my shirt and am always available to help people who seek a deeper connection with their soul. You might say I plant seeds!
I’m also a strong believer in actions speaking louder than words though a well-written book with good intentions is lovely! Speaking of words, I have a fancy for lexigrams and can spend hours dissecting the secret meaning of a word.
Poetry is another fascination of mine which gave me the ability to ace my senior year English class by writing a book of poems. And last but not least, I stay young at heart by having fun, fun, fun and frequently playing elf-like practical jokes on my friends.
One more final thing—most importantly, I know we are all here for two reasons, to give love and to receive love.
If you thought I was only going to give you the good stuff, on the other side of the coin, I’m blunt to a fault and have a tad of a gutter-mouth (which I hope is balanced out by my sense of humor). I can’t stand cigarette smoke and “evil-eye” anyone who smokes around me.
I can be hard on myself and also boldly competitive with myself. I’m slightly impatient with others and have an extremely low tolerance for negativity, repetitiveness and people who are whiners, self-absorbed or disrespectful of animals and Mother Earth.

On the drive, all I could think about was Divine Timing and the profound connection I felt with Thomas. Call it fate, destiny, karma, whatever you like but I was living it.
At the party I learned Thomas was also a musician. He had just written and recorded his first song. This made sense since I gravitated towards rockers and his look did not match my vision of a stuntman, which I thought of as a scruffy-looking guy with missing teeth who drank whiskey. I must have watched too many Westerns as a kid.
But this modern day stuntman was lovely, dahling, simply lovely! I was captivated by his gentle power, child-like innocence, strong independence, determination, and financial success. I came to this conclusion by observing his personality, energy and also the location and size of his big beautiful house.
One room was dedicated to his work. It was full of autographed movie scripts and souvenirs from television shows and films. I felt like I was walking through a trophy room in Hollywood. On the walls were photos of Thomas with movie stars, celebrities and women lots of women.
I noticed one photograph in particular, Thomas was wearing a pilot’s uniform. He looked sexy in sunglasses and a captain’s hat, his long dark hair hanging beneath it. His smile hinted that he had just achieved something or was just about to achieve something, maybe with the sexy, tall, black woman in a stewardess uniform standing close to him. His arm was around her shoulder and I couldn’t help noticing how close his hand was to her breast, or was I seeing more than was really there? I felt a twinge of jealousy. I really like this guy!
While we girls were huddling in his living room over drinks, I made it clear to my friends that I felt a connection to Thomas and really wanted to get to know him. In a flash, they all but kicked me out of the way. One waitress had the audacity to offer to share him with me. No thanks, I don’t share my sweets, and I don’t do rub-a-dub-dub three hynees in a tub.
The other guys flirted with the girls but it was obvious that Thomas was the big fish everyone wanted to hook. Oddly enough, all of us girls went home alone that night. It seems he was more hell-bent on entertaining us then getting into our panties. Darn, darn, darn! He was not going to be an easy catch, but I honestly liked the challenge.
I decided to keep the train ticket from my windshield as a memento. I hid it in an old book that had belonged to my Grandmother. I had the feeling one day it would come in handy.
Later, I phoned Nina and told her about the magic man I’d just met. She was used to my gut-intuition stories and, though she teased me a bunch, she had a genuine respect for my opinion.
Over the following weeks my life continued as usual but Thomas stayed in my mind. Coincidence or not, we were constantly running into each other at convenience stores, diners, nightclubs and parties. At a few of the gatherings, we stood in eye-range and checked each other out. But he always had a group of guys and girls with him so it was hard to get too close. When we did look into each other’s eyes, however, there was an intense feeling of recall and kinship that yearned to be explored even though he always got antsy and silly.
I was definitely experiencing something brand new. I wanted to be right about our strong connection and I also wanted to be intimate with him more intensely than any guy before. But something told me to proceed slowly. This knowing guided me to a new understanding. I wasn’t used to surrendering, but a stronger force than me was at work here. So I gave permission to the Universe to steer me in the direction of my highest good. I truly believed that if it was meant to be, it would be.
Then it happened—as quickly as Thomas entered my life, my magical run-ins with him suddenly stopped. I heard through the grapevine that he was traveling back and forth from here to California. Yet he never reached out to me. I yearned to chase him but instead listened to my inner guidance. I was also bothered that my gut instincts were so far off about Thomas. It made me wonder if I was losing my touch as a woman along with my gift of insight.
I was continually playing mental tennis. But after one too many mind-boggling replays, I wrote in my journal to get some healing. Through this process, I literally wrote off our connection and accepted the fact that I was simply mistaken. Some things are just that simple … aren’t they?
I was relieved to learn from one of my waitress friends that Thomas was engaged to a stewardess who was African-American. I would never have guessed he was in a relationship, based on the way he acted with all of us women. Then I remembered the photo in his trophy room. I wondered whether his fiancé was the beautiful black woman. Maybe she wasn’t a stuntwoman after all—and I hadn’t lost my touch…